A female chick at the cathedral

The cathedral's only chick was ringed yesterday. Its measurements are as follows: weight = 786 g and wing = 158 mm. These data indicate that it is a female. But it also indicates a very average physical condition because a weight of 786 g at the age of 3 weeks is not great. In comparison, the female Peregrine chick from Uccle weighed 1 kg at the same age.

The Peregrine female, which has been nesting since 2020 at the cathedral, is therefore not a super breeder. A clutch of two eggs, a single falcon hatching, effectively indicates that her potential is limited. But this is also Nature. There are individuals more gifted than others, more intelligent than others, with greater biological potential than others.

Experience plays an important role in breeding success. But the pair of Peregrines currently nesting at the cathedral is nesting the third time. So he must have acquired enough experience in rearing, feeding chicks. And yet, careful observation of the female shows that she is "awkward" to feed her chick. For the first few days, she couldn't figure out how to feed him. It is likely that it was the investment of the adult male that allowed the chick to survive. And maybe also "thanks" to the fact that only one egg hatched. Obviously, mathematically, one chick receives proportionally more food than if there are several of them.

In 2020, the female laid 4 eggs of which two hatched. The two falcons died within a week, obviously from undernourishment. In 2021, the couple changed nests, out of view of the cameras, so we don't know the number of eggs laid or the number of chicks hatched. On the other hand, only one juvenile falcon was observed to have fledged. Two juvenile falcons in 3 nesting periods, it's not famous, but that's how it is! We are observers of Nature. And Nature is diverse, including among individuals! 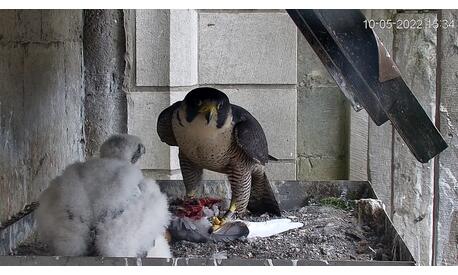