The falcon chicks of Saint Job have been ringed

Falcons for all is the part of sharing with the general public of the peregrine falcon population monitoring program set up by the Royal Belgian Institute of Natural Sciences upon the return of the species to Belgium in 1994.

This study and observation program aims to monitor and understand the evolution of the population in order to be able to sound the alarm in time if ever a new threat darkens (again…) the sky of the Peregrine Falcons. A threat could be the project of (false) sterilization of feral pigeons currently under discussion in Brussels and beyond in Belgium. We will talk about it again!

The program is based on a network of experienced collaborators who, all over Belgium, identify breeding pairs, describe the typology of nesting sites, count the number of falcons and, if possible, ring them. Ringing (or banding) is particularly interesting, it allows more complete analyses.

Ringing is the process of putting an indestructible metal ring on a bird's leg, engraved with a unique code and the address of the responsible scientific institution. The bird is therefore identified individually. The technique is like a passport or a car's license plate (not very romantic!).

If it is re-observed, recaptured or ultimately found dead, it will be possible to trace the route of the ringed bird, to know its life history. Migration strategies can be determined. The relationships between an environment and a couple can be evaluated. The causes of mortality, the survival rate, fidelity between partners and longevity are all parameters that can be observed, analyzed and calculated. The most interesting thing is that the observations made can be compared from site to site, from region to region, from year to year in order to observe the evolution of the falcon population according to various elements such as the evolution of agricultural practices, legislation on pesticides or hunting, urbanization or even climate change.

In the context of specific programs, such as in Belgium on Peregrine Falcons, it may be useful to put a second ring, on the other leg of course. This ring is coloured and engraved with a very short code and therefore written in large characters. The goal? Being able to read the code from a distance and therefore follow the falcons from a distance, while observing them through a telescope. Or through a camera in "Falcons for All"!

Banding offers other possibilities, indirect to this one. By handling the falcon chicks to ring them, we can take the opportunity to weigh and measure them! By comparing the weight with the wing measurement, it is possible to determine whether it is a male or a female. When the brood is not monitored by camera, these measurements also make it possible to determine the age of the falcons and therefore to deduce the date of laying and therefore to determine the start of nesting. This is again an important parameter when we want to study the evolution of a species and more generally the evolution of our environment.

The measurements of the brood in the Saint Job Church have determined that there are 2 female and 2 male juveniles this spring. Both females were marked with black rings engraved with the codes ATJ and ATK. They weighed 810 g and 787 g respectively. As regards the males, the codes are ATL and ATP for a respective weight of 572 g and 617 g.

The attached video illustrates the ringing process. This takes a few minutes for each chick. It is about being as efficient and as fast as possible in order to get the chicks back to their nests without delay. Falcon parents, like all bird parents, do not recognize their young by smell. Handling by humans is therefore not a problem. Unlike mammalian parents such as rabbits, hares, deer, in whom the risk of abandonment of a young is very high from the moment it has been touched by humans.

The Peregrine pair in Uccle has been nesting in the steeple of Saint Job's church since 2015. Including this year, the two mates have in the meantime reared 25 falcon chicks: 9 females and 16 males. 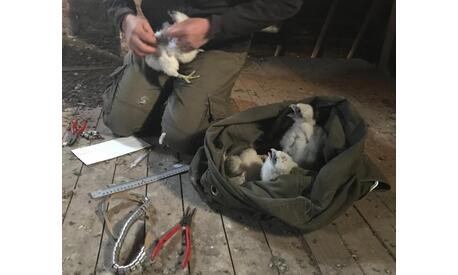 The wing of the first falcon is measured; its siblings are observing the process (photo OL).