What’s happening at the Cathedral of Saints Michael and Gudula?

As reported in the first blog of this season, the Peregrine pair who was first observed in central Brussels in the spring of 2019 and who nested at the cathedral last year, is present again. But they don’t nest. Hence, they do not nest in front of the camera! Because it seems that they have nevertheless initiated the nesting process in the heart of Brussels!

Why are we suggesting this? First, their mere presence. Already in February, the two partners were filmed several times a week perched on the cathedral. The video system is indeed active but is not connected to the internet. A pair of Peregrines, both of whom are known to be mature and already have been nesting together…who are now present but do not nest…it's still very surprising.

But there is more. For two weeks, the Peregrines have been filmed every day on the gargoyles. Most often, the male. But the female comes regularly in the picture as well. Both are then perched on the north tower to pluck freshly captured prey. This change in their behavior obviously suggests that something is indeed happening at the cathedral or in its immediate surroundings! But so far, the observation sessions have proved unsuccessful. The next attempt is scheduled for the coming weekend.

In the meantime, you might watch a series of photos and videos from the cathedral. Once again, the camera system allows us to discover in detail and beauty the behavior of “urban” Peregrines and in particular their diet. Today has been a rich day of insightful observations. The male Peregrine has indeed brought back two freshly caught Rose-ringed Parakeets but also… a Common Cuckoo! This is the second time in 15 years of monitoring that this species has been listed on the Peregrine’s menu at the Cathedral. Less than a month ago this Common Cuckoo must still have been in its winter quarters, most likely in the Congo. He managed to fly over the Sahara in one go, to cross the Mediterranean, to cross France but in the end encountered a Peregrine Falcon ... that too is Nature. 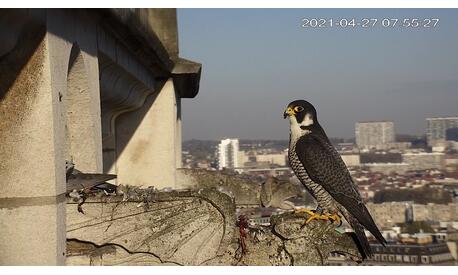 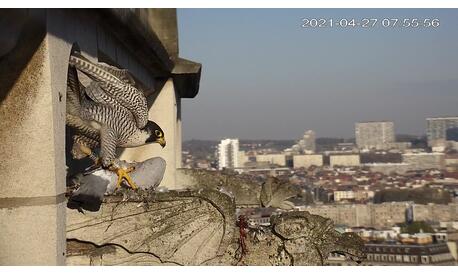 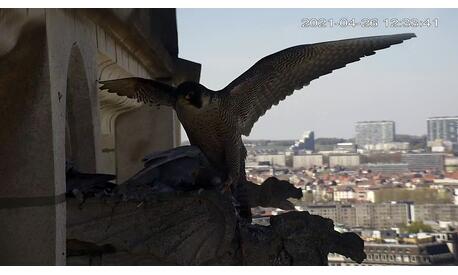 Cathedral, 25/04/2021, the male watches the sky in search of a nocturnal migrant. He regularly captures Black-headed Warblers in nocturnal migration. 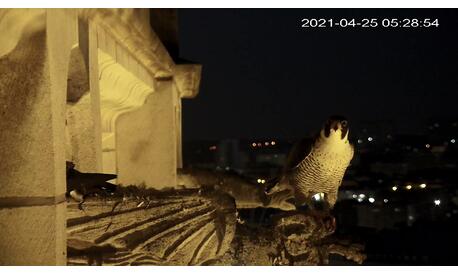 Cathedral, 04/25/2021, even at night, the visual acuity of the Peregrine Falcon is exceptional! 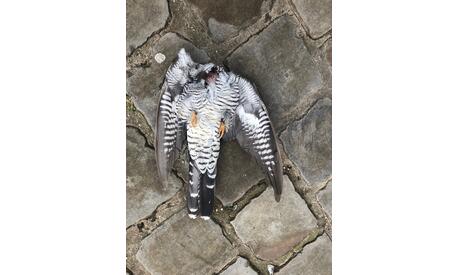 Cathedral, 04/29/2021, the unfortunate Cuckoo Gray is lying on the forecourt of the cathedral. The Peregrine dropped it after he had beheaded it and started plucking it before eating it (photo DV).
View the photos in large format
Top